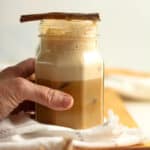 Pumpkin Foam Cold Brew is both cheaper and better to make at home than the drive through! You can also control what’s in it, which is a bonus if you’re monitoring sugar and calories!

It’s SO much more economical to make your own specialty coffee drinks at home! Try my Homemade Pumpkin Spice Lattes, a couple of Cozy Caramel Lattes, or my favorite Homemade Eggnog Lattes next!

Yup, I 100% believe that this one is better than the Starbucks version. Won’t you give it a try and let me know?

We do occasionally enjoy coffee at a fun coffee shop, so when I indulge, I’m always thinking of a copycat version I can make at home. It’s fun to experiment and ya’ll know that my favorite place to be is in my own kitchen.

While our weather is just starting to cool off slightly, I’m dreaming of cooler days ahead. Pumpkin cold brew makes sense when you’re craving a pumpkin-y flavor but don’t want anything hot.

What are you waiting for? Let’s make the best Pumpkin Foam Cold Brew!

These ingredients are ALWAYS available in my kitchen for that last minute craving for the BEST cold brew EVER!

Step 1
Make cold brew. This should be done ahead of time and chilled. You could also buy cold brew at the store if you don’t make your own version at home. But trust me…you’re going to want to!

Step 3
Blend. Start the blender and blend until smooth and foamy! I recommend letting it run for about 30 seconds or so.

Step 4
Pour. Pour into glasses filled with ice. I love using mason jars for a fun fall presentation. Add a cinnamon stick, a sprinkle of cinnamon, and you can even add whipped cream for some extra decadence!

How do I make cold brew?

Great question! I’ve got a little tutorial on the blog that explains how to make the best cold brew! A simple process and the cold brew can be stored in your refrigerator for 2-3 weeks.

Can I make this drink hot?

I don’t recommend making this into a hot drink. It’s so good over ice! If you want a hot pumpkin drink, try my Homemade Pumpkin Spice Lattes.

What if I don’t have a blender?

If you don’t own a blender, just mix everything up in a large mason jar. Then shake vigorously until everything is well mixed and your arms are tired! Bonus – an upper body workout! However, the blender is the best method. If using a mason jar, it may be a little gritty.

Is this drink healthy?

These pumpkin drinks are healthier than most. They don’t contain any refined sugars – just some pure maple syrup. The calories are also FAR less than you’d find at Starbucks!

Can I make these in advance?

Yes, you can! Make them as directed, pour into mason jars (without ice) place lid on, and store in the refrigerator. When ready to serve, add ice to jars and shake vigorously! Add a cinnamon stick and serve! 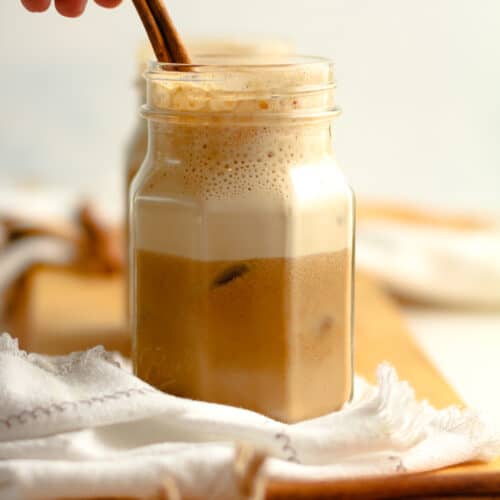 Pumpkin Foam Cold Brew is both cheaper and better to make at home than the drive through! You can also control what's in it, which is a bonus if you're monitoring sugar and calories!
5 from 7 votes
Print Pin Rate
Course: Drinks
Cuisine: American
Prep Time: 10 minutes
Servings: 2 servings
Calories: 135kcal
Author: Sue Ringsdorf

You can make these drinks in advance! Make them as directed, pour into mason jars (without ice) place lid on, and store in the refrigerator (for a day or so). When ready to save, add ice to jars and shake vigorously! Add cinnamon sticks and serve!